William Clark Gable was born on February 1, 1901 in Cadiz, Ohio. Later that year his mother died, and his father sent him to live with his maternal aunt and uncle in Pennsylvania, where he stayed until he was two. His father then returned to take him back to Cadiz. When Clark was 16 he dropped out of school and worked at many odd jobs before joining a traveling theater company.
On December 13, 1924 he married Josephine Dillon, his acting coach and 15 years his senior. Around that time, they moved to Hollywood so that Clark could concentrate on his acting career. In April 1930, they divorced and a year later he married Maria Langham (a.k.a. Maria Franklin Gable), also about 17 years older than him. After working as an extra in various movies, he was offered a small part in the The Painted Desert(1931) in 1931.
From this point, his acting career flourished, and in 1934 he won an Academy Award for his performance in Frank Capra's classic It Happened One Night (1934). The next year saw a starring role in The Call of the Wild (1935) with Loretta Young. Divorced in 1939, he later that same year starred in Gone with the Wind (1939).
In March 1939 Clark married Carole Lombard, but tragedy struck in January 1942 when the plane in which Carole and her mother were flying crashed into Table Rock Mountain, Nevada, killing them both. Clark then volunteered to be drafted and served in Europe for several years. After the war he continued with his film career and married Silvia Ashley, the widow of Douglas Fairbanks, in 1949. Unfortunately this marriage was short-lived and they divorced in 1952.
In July 1955 he married a former sweetheart, Kathleen Williams Spreckles (a.k.a. Kay Williams) and became stepfather to her two children, Joan and Adolph ("Bunker") Spreckels III. On November 16, 1959, Gable became a grandfather when Judy Lewis, his daughter with Loretta Young, gave birth to a daughter, Maria. In 1960, Gable's wife Kay discovered that she was expecting their first child. In early November 1960, he had just completed filming The Misfits (1961), when he suffered a heart attack, and died later that month.
Gable was buried shortly afterwards in the shrine that he had built for Carole Lombard and her mother when they died. In March 1961, Kay Gable gave birth to a boy whom she named John Clark Gable after his father. 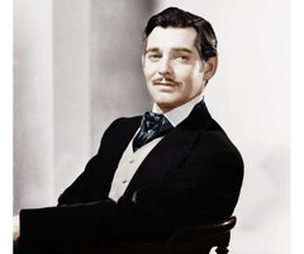