Margaret Mitchell was born on November 8, 1900 in Atlanta, Georgia. She grew up hearing stories from Civil War veterans, and sometimes she pretended to fall asleep on the porch just so she could hear more stories. She knew everything there is to know about the Civil War, except that the south lost. She found this out when she was ten.
Mitchell left for Smith College in 1918. Before leaving, she fell in love with Lieutenant Clifford Henry, who was training to fight in WWI. In 1919, shortly after she learned that Henry died in France, she received news that her mother was ill, so she rushed home. Sadly, she did not make it home in time, and she stayed to care for her father and brother.
Later, Mitchell got a job as the first woman to cover hard news for 'The Atlanta Journal,' and she then married Red Upshaw. But the marraige was short, because Upshaw was a bootlegger and an alchoholic. So then Mitchell became Mrs.John Marsh. Margaret was forced to quit her job because she had problems with her ankles and feet. Bedridden, she started to read voraciously. She read through whole sections of Atlanta's Carnegie Library. Her husband, John Marsh, carted books for her on a trolley, in their dreadfully small apartment. It was probably as big as the master bedroom and bathroom in your house. (the WHOLE apartment)
One day, Marsh walked in and said to Mitchell, "You have read everything except the maths and sciences. So here is a typewriter. Here is some copypaper. Write a book to amuse yourself." And amuse herself she did. She started writing GWTW in 1926, and she continued until 1929. In her first manuscripts, she named the main character "Pansy" instead of Scarlett. She also wrote the end first. She didn't go in order, and her small apartment was filled with manuscripts that she stuffed under the couch and in random drawers. The novel was largely complete in 1929, and she "hit a few more licks in 1930 and 1931." After that, she worked on the book off and on. Although Mitchell was very secretive about her work, she eventually gave her manuscript to a visiting New York Publisher, because she got mad that someone said "Peggy isn't serious enough to write a book." So she went home and got the manuscripts and said "Here! Take it before I change my mind!" He encouraged her to finish the book, and one other major change. He didn't like the name Pansy. So, (thankfully) she changed her name to Scarlett. Then, on June 10, 1936, 'Gone With The Wind' was published.
The book was an instant success. By October of that year, the novel had sold one million copies. It was so popular, some people thought it was based on a true story. She said "I made up Tara, just as I made up every character in the book. But no one will believe me." Then, David O. Selznick bought the movie rights for Mitchell's asking price of $50,000. At the time, it was the highest price ever paid for an author's first novel. Then, a worldwide "Search for Scarlett" started, which earned the film a lot of publicity. The movie starred Vivien Leigh as Scarlett, and Clark Gable as Rhett. But when Margaret was asked her opinions on the film, she would not answer, because she did not want to get involved in the film version for she was very private.
But she did critique one thing. That was Tara and Twelve Oaks. She said: "I grieve to hear that Tara has columns. Of course, it didn't and looked nice and ugly like Alex Stephens' Liberty Hall in Crawfordville, Georgia." She also said, about Twelve Oaks, (Ashley's home) "I did not know whether to laugh or throw up at the TWO staircases. Nothing like that was ever seen in Clayton County." But the set designers ignored her.
Mitchell did not have anything else to do with the film, but she did attend the premier in Atlanta, Georgia. But sadly, she died only 10 years later, because on August 11, 1949, she was crossing the street while on her way to see a movie with her husband, and Mitchell was struck by an off duty cab driver. She died in the hospital on August 16, and was buried in Atlanta's Oakland cemetery with the rest of her family.
Years before, in an interview, Mitchell was asked what GWTW was about. She said, "If the novel has a theme it is that of survival. What makes some people come through catastrophes and others, apparently just as able, strong, and brave go under? It happens in every upheaval. Some poeple survive; others don't. What qualities are in people who fight their way through triumphantly that are lacking in those that go under? I only know that suvivors used to call that quality 'gumption.' So I wrote about people who had gumption and people who didn't..." 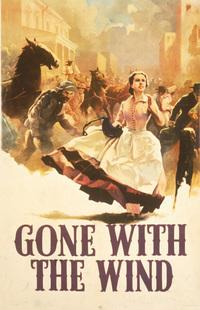