Olivia Mary de Havilland was born to a British patent attorney and his wife on July 1, 1916, in Tokyo, Japan. Her sister, Joan, later to become famous as Joan Fontaine, was born the following year. Her parents divorced when Olivia was just three years old, and she moved with her mother and sister to Saratoga, California. After graduating from high school, where she fell prey to the acting bug, Olivia enrolled in Mills College in Oakland. It was while she was at Mills that she participated in the school play "A Midsummer Night's Dream" and was spotted by Max Reinhardt. She so impressed Reinhardt that he picked her up for both his stage version and, later, the Warner Bros. film version in 1935. She again was so impressive that Warner executives signed her to a seven-year contract. No sooner had the ink dried on the contract than Olivia appeared in three more films: The Irish in Us (1935), Alibi Ike (1935) and Captain Blood (1935), the latter with the man with whom her career would be most closely identified, heartthrob Errol Flynn. He and Olivia starred together in eight films during their careers.
In 1939 Warner Bros. loaned her to David O. Selznick for the classic Gone with the Wind(1939). Playing the sweet Melanie Hamilton, Olivia received her first nomination for an Academy Award for Best Supporting Actress, only to lose out to one of her co-stars in the film, Hattie McDaniel. After GWTW, Olivia returned to Warner Bros. and continued to churn out films. In 1941 she played Emmy Brown in Hold Back the Dawn (1941), which resulted in her second Oscar nomination, this time for Best Actress. Again she lost, this time to her sister Joan for her role in Suspicion (1941).
After that strong showing, Olivia now demanded better, more substantial roles than the "sweet young thing" slot into which Warners had been fitting her. The studio responded by placing her on a six-month suspension, all of the studios at the time operating under the policy that players were nothing more than property to do with as they saw fit. As if that weren't bad enough, when her contract with Warners was up, she was told that she would have to make up the time lost because of the suspension. Irate, she sued the studio, and for the length of the court battle she didn't appear in a single film. The result, however, was worth it. In a landmark decision, the court said not only that Olivia did not have to make up the time, but that all performers were to be limited to a seven-year contract that would include any suspensions handed down. This became known as the "de Havilland decision"; no longer could studios treat their performers as mere cattle.
Returning to screen in 1946, Olivia made up for lost time by appearing in four films, one of which finally won her the Oscar that had so long eluded her. It was To Each His Own (1946), in which she played Josephine Norris to the delight of critics and audiences alike. Olivia was the strongest performer in Hollywood for the balance of the 1940s. In 1948 she turned in another strong showing in The Snake Pit (1948) as Virginia Cunningham, a woman suffering a mental breakdown. The end result was another Oscar nomination for Best Actress, but she lost to Jane Wyman in Johnny Belinda (1948). As in the two previous years, she made only one film in 1949, but she again won a nomination and the Academy Award for Best Actress for The Heiress (1949). After a three-year hiatus, Olivia returned to star in My Cousin Rachel (1952). From that point on, she made few appearances on the screen but was seen on Broadway and in some television shows. Her last screen appearance was in The Fifth Musketeer (1979), and her last career appearance was in the TV movieThe Woman He Loved (1988) (TV). During the hoopla surrounding the 50th anniversary of GWTW in 1989, she graciously declined requests for all interviews as the only surviving one of the four main stars. Today she enjoys a quiet retirement in Paris, France. 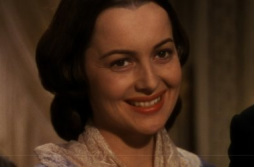 Melanie Hamilton Wilkes was the sweetest person there ever was. She was born in 1844. Sadly, her parents died shortly after, so with her brother, Charles, she moved to Atlanta to live with her Aunt Pittypat. Sometimes she visited her cousin, Ashley Wilkes, at his plantation called Twelve Oaks. She knew she was going to marry Ashley for quite a few years, but their engagement had not been announced because "Miss Melly hasn't been very well." But with all the war talk, they decided to announce it at the Wilkes's barbeque at Twelve Oaks. They married about two weeks later, the day after Scarlett and Melanie's brother Charles's wedding. Melanie was thrilled that Scarlett was her sister, for she admired her very much.
Sadly, about two months later, Charles died at camp from getting pnemonia and measles. Melanie was heartbroken. But, Scarlett came to visit her and Aunt Pittypat in Atlanta, so she was very happy. Although people were talking about Scarlett because she was not acting like a proper widow, and was involved with Rhett Butler, Melly didn't care. She refused to see dishonor in anyone whom she loved. Scarlett stayed longer and longer in Atlanta, so long that she pretty much lived there. Although Scarlett didn't have the best of reputations, Melanie stood beside her. Everyone valued Melly's opinion because she was so kind and ladylike.
Two years after the war started, Ashley came home for three days during Christmas. Melanie would not leave his side. In fact, she was so upset when he was leaving, Ashley did not allow her to go to the depot with him. Later, she had a child and named him Beau. Melly was very weak and ill afterwards, for she was sick before she had the baby also. Right after Beau was born, Scarlett wanted desperately to go home to Tara. So she got Rhett Butler to help them get there. Melanie stayed at Tara for a long time, and was very grateful for all that Scarlett had done for her.
After the war, Ashley came home. He wanted to go to New York, but Scarlett wanted him to come to Atlanta and work at her lumber mill. Melanie also wanted to go back to Atlanta, and thought it was the least they could do after all Scarlett had done for them. Ashley reluctantly agreed. While in Atlanta, one night Ashley and the other neighborhood men went out on a Ku Klux Klan raid, because earlier Scarlett had been attacked. Fortunately, Rhett Butler came in and fooled all the Yankees, so none of the men were hanged. But, Scarlett's husband, Frank Kennedy, and Tommy Welburn were shot and died. Ashley was also shot, but it was in the shoulder so he was alright.
Subsequently, Scarlett married Rhett Butler, so her reputation got even worse. Melanie still loved Scarlett, though. But Scarlett did nothing to redeem her reputation. Melanie even heard that India, Archie, and Mrs.Elsing caught Scarlett and Ashley hugging, but she refused to believe it. Melanie loved her, and refused to believe that her best friend and her husband were embracing, despite what everyone told her. So that night, Melly stood beside Scarlett, and told India she was no longer welcome in her home.
A short while after, Scarlett suffered from a miscarriage. Melanie went to comfort Rhett, but he was in a drunken state. He said that Scarlett didn't love him. Melly refused to believe this. She knew Scarlett loved Rhett. He then went back to his senses, for Rhett always valued what Melanie said. Sadly, Bonnie, Scarlett and Rhett's daughter, died too. Rhett went crazy and wouldn't let a funeral take place until Melanie convinced him to.
Then, a dark night in 1873, Melanie passed away. She was suffering from a miscarriage, and her body could not recover as Scarlett's had. Her last words were to Scarlett. They were "Be kind to Captain Butler. He loves you so."