Vivian Mary Hartley was born on November 5, 1913, in Darjeeling, India, a strange place for one of the world's most celebrated actresses to be born. She was to live in this beautiful country for the next six years. Her parents wanted to go home to England but because of World War I they opted to stay in India. At the end of the war the Hartleys headed back to their home country, where Vivien's mother wanted her daughter to have a convent education. She was one of the youngest in attendance, and it was not a happy experience for her. One of the few consolations was her friendship with a classmate who also became a successful actress, Maureen O'Sullivan While there her mother came for a visit and took her to a play on London's legendary West Side. It was there that Vivien decided to become an actress.
At the end of her education, she met and married (Herbert) Leigh Holman in 1932 and together had a child named Suzanne in 1933. Though she enjoyed motherhood, it did not squelch her ambition to be an actress. Her first role in British motion pictures was as Rose Venables in 1935's The Village Squire (1935). That same year Vivien appeared in Things Are Looking Up (1935), Look Up and Laugh (1935) and Gentlemen's Agreement (1935). In 1938, Vivien went to the US to see her lover, Laurence Olivier, who was filming Wuthering Heights (1939) (she had left Herbert Leigh in 1937). While visiting Olivier, Vivien had the good luck to happen upon the Selznick brothers, who were filming the burning of Atlanta for the film, Gone with the Wind (1939), based on Margaret Mitchell's novel. The role of Scarlett O'Hara had yet to be cast and she was invited to take part in a screen test for the role. There had already been much talk in Hollywood about who was to be cast as Scarlett.
Some big names had tried out for the part, such as Norma Shearer, Katharine Hepburn and Paulette Goddard. In fact, most in the film industry felt that Goddard was a sure bet for the part. However, four days after the screen test, Vivien was informed that she had landed the coveted slot. Although few remember it now, at the time her casting was controversial, as she was British and many fans of the novel it was based on felt the role should be played by an American. The film became one of the most celebrated in the annals of cinema. Not only did it win Best Picture during the Academy Awards, but Vivien won for Best Actress. Already she was a household name. In 1940, people saw Vivien marry Olivier and the next year they appeared together in That Hamilton Woman (1941).
By the time of the filming of Caesar and Cleopatra (1945), her life had begun to unravel. She had suffered two miscarriages, contracted tuberculosis, and was diagnosed as a manic depressive. However, she gave another excellent performance in that film and her public was still enthralled with her, although the film was not a financial success. She rebounded nicely for her role as Blanche DuBois for her second Oscar-winning performance in A Streetcar Named Desire (1951) opposite Marlon Brando in 1951. She wasn't heard from much after that. She made a film in 1955 (The Deep Blue Sea (1955)). In 1960, her marriage fell apart, as Olivier left her to marry actress Joan Plowright. She appeared on-screen again until 1961 in The Roman Spring of Mrs. Stone (1961), co-starring Warren Beatty.
Vivien's final turn on the screen came in Ship of Fools (1965), and that was a small part. She died at the age of 53 after a severe bout of tuberculosis on July 7, 1967. 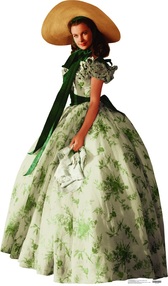 Katie Scarlett O'Hara Hamilton Kennedy Butler is that selfish, headstrong woman that we all love (or hate). She was born in 1845, to Gerald O'Hara, an Irishman, and Ellen Robillard, a "Coast Aristocrat of French descent." She strived to be like her kind, gentle mother, but turned out more like her bold father. She grew to love her plantation, Tara, just like her father did. "For anyone with a drop of Irish blood in them, the land that they live on is like their mother." Scarlett was taught how to be a 'lady" by her mother and mammy. Although her two sisters, Suellen and Careen, caught on quite easily, Scarlett was a bit harder to teach. For example, her playmates as a child were not the neighborhood girls, but the boys with whom she played tag and climbed trees. As she got older, most of these boys became her beaux. Scarlett was able of making any man fall in love with her, and this was handy because "She was constitutionally unable to endure any man being in love with any woman not herself."
On the day that the war started, Scarlett agreed to marry Charles Hamilton. Not because she loved him, but out of spite. She loved Ashley Wilkes, who got married to Melanie Hamilton the day after her wedding. Melanie then became Scarlett's sister-in-law, and loved her like a real sister. But Scarlett did not like Melly, for she thought that she didn't have any sense, and she was jealous of her marrige to Ashley.
About 2 months after their wedding, Charles died at camp. Scarlett then took herself and her newborn baby, Wade Hampton Hamilton, to Atlanta to visit Melanie and her Aunt Pittypat. She then began to associate with Rhett Butler, which was horrifying because she was a widow. He then began to court her.
During the war, Scarlett was desperate to get out of Atlanta. There was no one to help her except for Rhett Butler. He got her out, as well as Melanie and her newborn baby, Wade, and Prissy, a servant. But he left her a few miles away from home because he wanted to go join the army. Terrified, Scarlett made her way home, to find that Tara was not burnt, but her mother passed away the day before, and her father had lost his mind. Scarlett then became the head of Tara and promised "As God as my witness, I'll never be hungry again!"
After the war, Scarlett needed $300 dollars to pay the taxes on Tara, so she tried to get the money from Rhett while he was in jail, but he refused. But she did find money. Scarlett married Frank Kennedy, who was previously engaged to her sister, Suellen. Scarlett then took control of Frank's lumber mills and his store. Frank was horrified of this unlady-like act, but too timid to tell her so. A little later, Scarlett's father died from a failed attempt at jumping a fence with his horse. His neck broke. Scarlett and Frank eventually had a baby girl, named Ella Lorena Kennedy. When Ella was newborn, Scarlett and the whole community (other than Frank) thought that Ella was a very ugly baby. A year or two after their marriage, Scarlett was attacked in Shantytown while driving through there alone. That night, Frank and a few other men went to "clean up that area where she got attacked." Frank died in this Ku Klux Klan raid. Scarlett did not know Frank was in the clan, and did not want him to be.
The day of Frank's funeral, Rhett Butler proposed to Scarlett. Scarlett agreed, partly for his money. They married a year later. They had a child named Eugenie Victoria "Bonnie Blue" Butler, and after this Scarlett and Rhett began to have many fights. A few years after, Scarlett was caught "embracing" (hugging) Ashley, but it was just a friendly hug. Nobody but Melanie believed her. That night, she came home to a drunken Rhett, and all his true feelings for her came out. Scarlett thought that Rhett loved her, but he left for London with Bonnie for 3 months, and he only came back because Bonnie was missing her. Scarlett then suffered from a miscarriage by falling down the stairs, and became very ill. A little while after, Bonnie died from attempting to jump a bar with her pony, but she fell off and broke her neck.
Shortly after, Melanie died. Her last words were "Be kind to Captain Butler. He loves you so." Scarlett then realized two things. That Melanie was her only real friend, and that she didn't really love Ashley; she loved Rhett. Then she ran home to tell him that. But Rhett said he was leaving and loved her no more. Scarlett was heartbroken, but she realized that she still had Tara, and that she could think of some way to get him back. "After all, tomorrow is another day."