Leslie Howard Stainer was born to Hungarian parents in London on April 3, 1893, and went to Dulwich College. After school, he worked as a bank clerk until the outbreak of World War I, when he went into the army. In 1917, diagnosed as shell-shocked, he was invalided out and advised to take up acting as therapy. In a few years, his name was famous on the stages of London and New York. He made his first movie in 1914 (The Heroine of Mons (1914). Howard married Ruth Martin in 1916, and they had 2 children. He became known as the perfect Englishman (slim, tall, intellectual and sensitive), a part that he played in many movies, and a part women would dream about. His first sound movie came in 1930, Outward Bound (1930), an adaptation of the stage play in which he starred. In Never the Twain Shall Meet (1931) and Smilin' Through(1932), he played the Englishman role to the hilt. His screen persona could perhaps best be summed up by his role as Sir Percy Blakeney inThe Scarlet Pimpernel (1934), a foppish member of society.
It was Howard who insisted that Humphrey Bogart get the role of Duke Mantee in The Petrified Forest (1936), a role that Bogart had played in the stage production. As he became more successful, he also became quite picky about which roles he would do, and usually performed in only two films a year. In 1939, he played the character that will always be associated with him, that of Ashley Wilkes, the honor-bound disillusioned intellectual Southern gentleman in Gone with the Wind (1939).
However, war clouds were gathering over England, and he devoted all his energy on behalf of the war effort. He directed films, wrote articles and made radio broadcasts. He died in 1943, when the KLM plane he was in was shot down by German fighters over the Bay of Biscay. 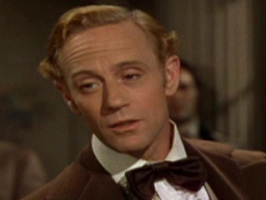 George Ashley Wilkes is a true southern gentleman. Born in 1836, he enjoyed the beautiful things in life, such as literature and music. His mother died when he was young, so one of his sisters, India Wilkes, became the lady of the house. He also had another sister, named Honey Wilkes.
Ashley Wilkes had known for some time that he would marry Melanie Hamilton, his cousin. "The Wilkeses always marry their cousins." His youngest sister, Honey, was engaged to Charles Hamilton, Melanie's brother. Ashley and Melanie's engagement was not announced for some time because "Miss Melly wasn't well." But, with all the war talk going around, they decided to annouce it before a war did start.
Ashley did not want there to be a war, but if there was one, he would still fight. "Most of the misery of the world has been caused by wars. And when the wars were over, no one ever knew what they were about." Then, that same day, the war started, and Ashley rushed off to enlist, even though he didn't believe in it. But he was going to do the gentlemanly thing and fight, because "If Georgia fights, I go with her." But before he went off to war, he was married to Melanie, despite the fact that Scarlett O'Hara told him that she loved him. But she married Charles Hamilton, Melanie's brother.
Two years after the war started, Ashley came home for a few days during Christmas. He spent all of those days in Atlanta, with Melanie by his side. The day he was leaving, he kissed Scarlett goodbye, even though Melanie was upstairs. Scarlett told Ashley that she still loved him, but he did not reply. He just told her good-bye.
During the war, Ashley was captured at Gettysburg, and was sent to Rock Island, a Yankee prison. Melanie and Scarlett did not know if he was alive or not. But after the war ended, he made his way back and found everyone at Tara, Scarlett's home. This was one of the few plantations that was not burnt. Here, Ashley found that he and Melanie had a child, named Beau. Though his spirits were broken because of the Confederacy's defeat, he went right to work at Tara, even though he knew almost nothing about working on a cotton platation. Ashley often got lost in his own thoughts, and dreamt of the old days.
After a few months, Ashley decided that he wanted to go up north to New York and work as a banker. However, Scarlett did not approve of this. She said she wanted him to come to Atlanta and work at her and Frank's (Scarlett's new husband) lumber mill. She and Melanie eventually convinced him to go to Atlanta. Ashley was not pleased with this, for he thought "If I go to Atlanta and take help from you again, I bury forever hope of standing alone." Basically, Ashley wanted to be his own man.
While in Atlanta, Ashley took place in a Ku Klux Klan raid, and got shot in the shoulder. He was not hanged, however, because Rhett Butler (0f all people) fooled to the Yankees, and the Yankees believed him. But Scarlett's husband died. She eventually married Rhett Butler, whom Ashley was not too fond of, even though Rhett saved his life. A few years later, Scarlett came to visit the mill on Ashley's birthday. They were caught hugging by his sister India, Archie, a convict, and Mrs.Elsing. It was just a friendly hug, but nobody but Melly believed that. That night, Scarlett still came to Ashley's birthday party, and Melanie stood beside her the whole time, refusing to believe that her best friend and her husband would embrace.
A year or two later, Melanie died from a miscarriage. Ashley was deeply wounded. "She is the only dream I ever had that lived and breathed and did not die in the face of reality."